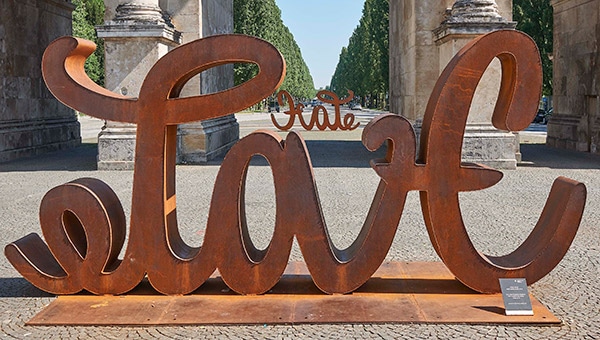 October 28, 2021 — Washington, DC — The public art sculpture LOVE HATE by German artist Mia Florentine Weiss makes its debut in the United States with a public opening in Farragut Square hosted by the Delegation of the European Union to the United States, in partnership with the Embassy of Germany and the Golden Triangle Business Improvement District (BID), on Tuesday, Nov. 9 at 2:00 p.m. Monumental in scale and ambition, the “one-word poem” consists of oversized letters, which spell out LOVE from the front and HATE from the back.

European Union Ambassador to the United States Stavros Lambrinidis and German Ambassador to the United States Emily Haber will introduce the installation, followed by an exclusive interview with the artist by social sculptor Philippa Hughes. The audience is then invited to participate in a thought-provoking ‘Happening in 3 Acts’. Guests are encouraged to write their own messages for love and peace while enjoying European-inspired fare.

Since May 2019, LOVE HATE has travelled Europe to stimulate social dialogue and promote peace. It has now crossed the Atlantic for the first time, landing first in Washington, DC. “It’s an ambiguous yet powerful message that symbolizes how we can turn hate into love through a change of perspective,” said Weiss. “It celebrates our unity as humans through our diversities, a message which resonates with all of us. LOVE HATE is a giant message on the street that we have a choice to make each day. We can choose to focus on love.”

The art will be on display at Farragut Square (K Street and Connecticut Avenue, NW) until March 2022, after which it will travel to Austin, Texas for the South by Southwest® (SXSW®) Festival. The Golden Triangle worked with the National Park Service to install the sculpture as part of the BID’s outdoor public arts program.

For more information regarding the LOVE HATE artwork event at Farragut Square, please visit https://bit.ly/EULOVEHATE. Follow European Union in the United States activities under @EUintheUS and the German Embassy under @GermanyinUSA on Facebook, Instagram, and Twitter.

Formed in 1998, the Golden Triangle Business Improvement District (BID) enhances Washington, DC’s central business district, the 44-square-block neighborhood stretching from The White House to Dupont Circle. Home to roughly 6,000 businesses, the BID provides a clean, safe, and vibrant environment for hundreds of thousands of workers, residents, and visitors, and encourages economic development through capital projects, public art, sustainability, and events. The Golden Triangle has been awarded LEED Platinum, the highest level of LEED certification, by the U.S. Green Building Council. It is the first BID in the world to be certified through the LEED for Communities program. For more information, visit: goldentriangledc.com and connect on Twitter, Facebook, and Instagram.