Washington, D.C. (March 15, 2022) – The Golden Triangle Business Improvement District (BID) today announced the winners of its 2022 Golden Haiku contest. More than 200 colorful Golden Haiku signs now adorn some of Washington DC’s most iconic streets and are brightening the Golden Triangle sidewalks for returning workers and visitors to the neighborhood this spring. 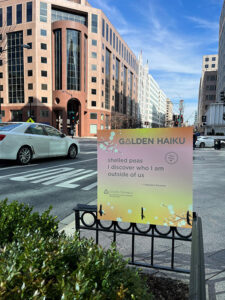 The annual competition attracted a record number of participants, with more than 1,600 submitters from around the world who contributed more than 2,900 original haiku. Participants in the DMV region accounted for almost half of the submissions. In total, participants represented 71 countries, 49 states, DC, and Puerto Rico. The farthest submissions came from halfway around the globe in Australia and Indonesia. All ages took part in the contest, with nearly 300 youth in elementary, middle, or high schools submitting haiku.

“Every spring, the Golden Haiku signs are a familiar and cheerful sight in the Golden Triangle. This year, participation increased by about 50 percent, with more than 500 additional submitters than ever before,” says Leona Agouridis, Executive Director of the Golden Triangle BID. “We’re elated to have a worldwide community writing haiku that enhances our streets as more people return to DC’s central business district.”

The 2022 theme of “Reboot and Rebloom” inspired a variety of haiku submissions. The Golden Haiku competition follows the Haiku Society of America’s guidelines for modern haiku, which does not require the traditional 5-7-5 structure. Removing the strict structural requirements for syllables frees the author to use evocative language to capture a moment or expression of beauty in a short, descriptive verse.

The winning haiku were selected by an esteemed panel of haiku experts, including Abigail Friedman, Lenard Moore, Kit Pancoast Nagamura, and John Stevenson. Winning authors received prizes up to $500.

The full list of winning haiku and printed signs are available on the Golden Triangle BID website.