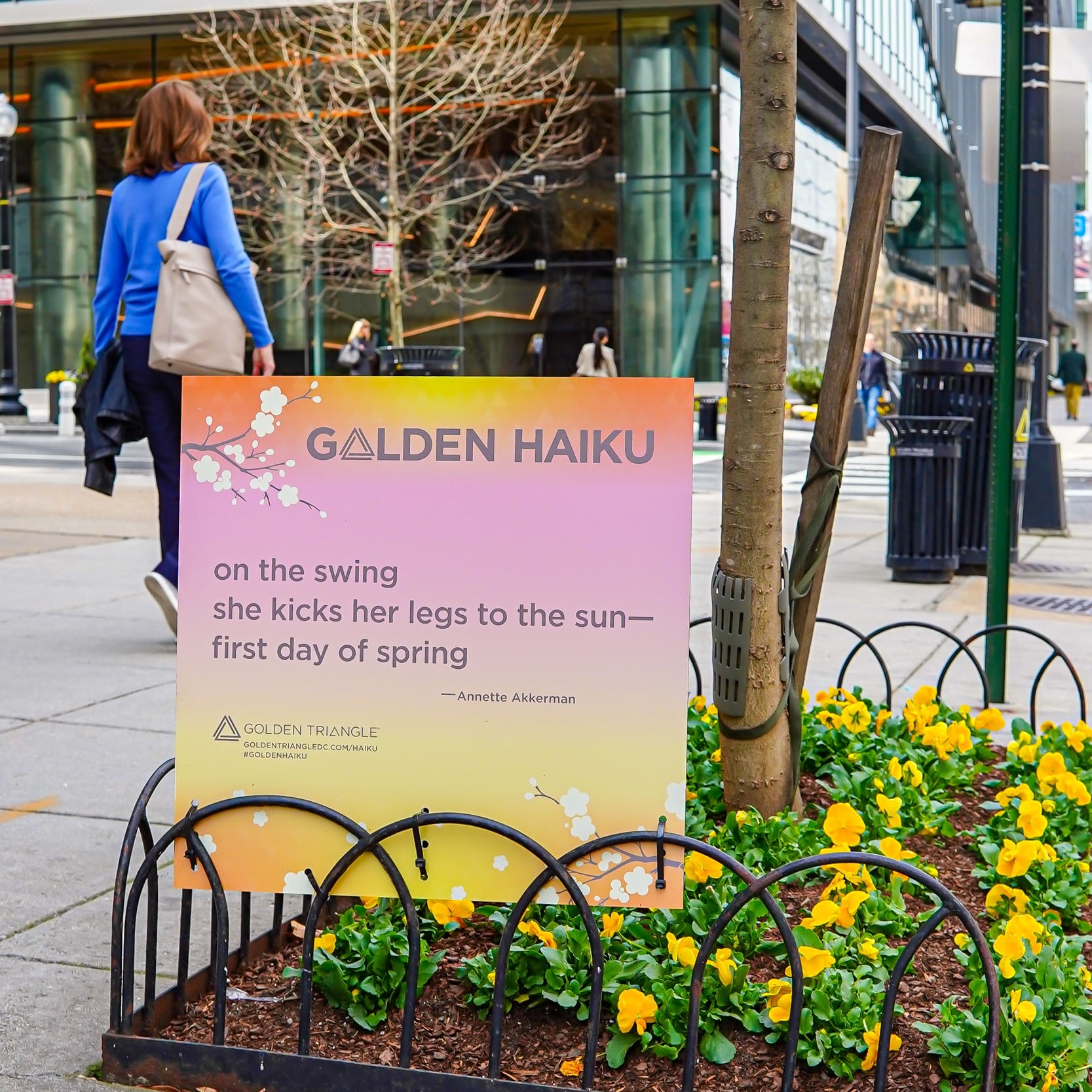 Washington, D.C. (January 13, 2023) – The Golden Triangle Business Improvement District (BID) today announced it is accepting submissions to its internationally recognized and highly anticipated Golden Haiku poetry contest. Poets and aspiring poets of all ages from DC and around the world may submit original, self-authored verse from now until Feb. 5, 2023.

The 2023 contest theme is “Notes to Nature” and participants are encouraged to celebrate nature with their haiku. Selected haiku will be shared digitally and displayed in hundreds of tree boxes around the central business district, from mid-March through May 2023.

“Golden Haiku has become a beloved preview of spring for the entire city,” said Leona Agouridis, Executive Director of the Golden Triangle BID. “It’s a joy to see people enjoying the haiku signs that are displayed all around the Golden Triangle as a celebration of imagination and community.”

Not sure how to write a haiku? Not to worry. This year the Golden Triangle BID is offering a workshop in partnership with the Japan-America Society of Washington, allowing contestants to polish their skills prior to submitting their haiku. The workshop, led by longtime Golden Haiku judge Abigail Friedman, will take place on the evening of Jan. 18 in the Golden Triangle.

Last year, the BID received haiku from more than 1,600 submitters from 71 countries, 49 states, the District of Columbia, and Puerto Rico, and nearly 300 submissions in the youth category.

Contest Rules – All entries are reviewed and judged by a distinguished panel of published haiku experts. The panel will select first, second, and third place winners, a regional favorite, and youth category winners. Prizes are awarded ranging from $500 to $75.

The expert panel of judges includes:

Abigail Friedman is an award-winning author of numerous works on haiku, including The Haiku Apprentice: Memoirs of Writing Poetry in Japan (Stone Bridge Press), I Wait for the Moon: 100 Haiku of Momoko Kuroda (Stone Bridge Press), and Street Chatter Fading (Larkspur Press). She is a former diplomat and is on the Board of Trustees of the Japan-America Society of Washington, DC.

Lenard Moore has been authoring haiku for more than 40 years. He was the first African American President of the Haiku Society of America. His published poetry has been translated into multiple languages and includes Poems of Love & Understanding (Carlton Press), The Open Eye (NC Haiku Society Press), and Desert Storm: A Brief History (Los Hombres Press).

Kit Pancoast Nagamura has been a columnist for The Japan Times for more than a decade and appeared as a regular on NHK World‘s Haiku Masters and Journeys in Japan programs. She has won one of Japan’s prestigious Ito-en Oi Cha Haiku Contest prizes and is a member of the Haiku International Association. Her book, Grit, Grace, and Gold, was published in 2020. She will be judging from Japan.

John Stevenson is managing editor of The Heron’s Nest. A former President of the Haiku Society of America, he has served as editor of Frogpond. He is the author of books such as Quiet Enough, Some of the Silence, Live Again, (d)ark, and Emoji Moon.

Submissions for the tenth annual Golden Haiku poetry contest will be accepted through Feb. 5, 2023. Winners will be announced in March. Participants may submit a maximum of two self-authored haiku on the BID’s website at goldentriangledc.com/haiku.